Friday evening Colleen and I headed over to Culpeper to take in the opening of Beer Hound Brewery. The brewery had its beginnings as a nano-brewery located in Barboursville, VA, and the move to Culpeper has been long-awaited. When we arrived there was a large crowed both inside and outside, despite some rain showers moving through the area. 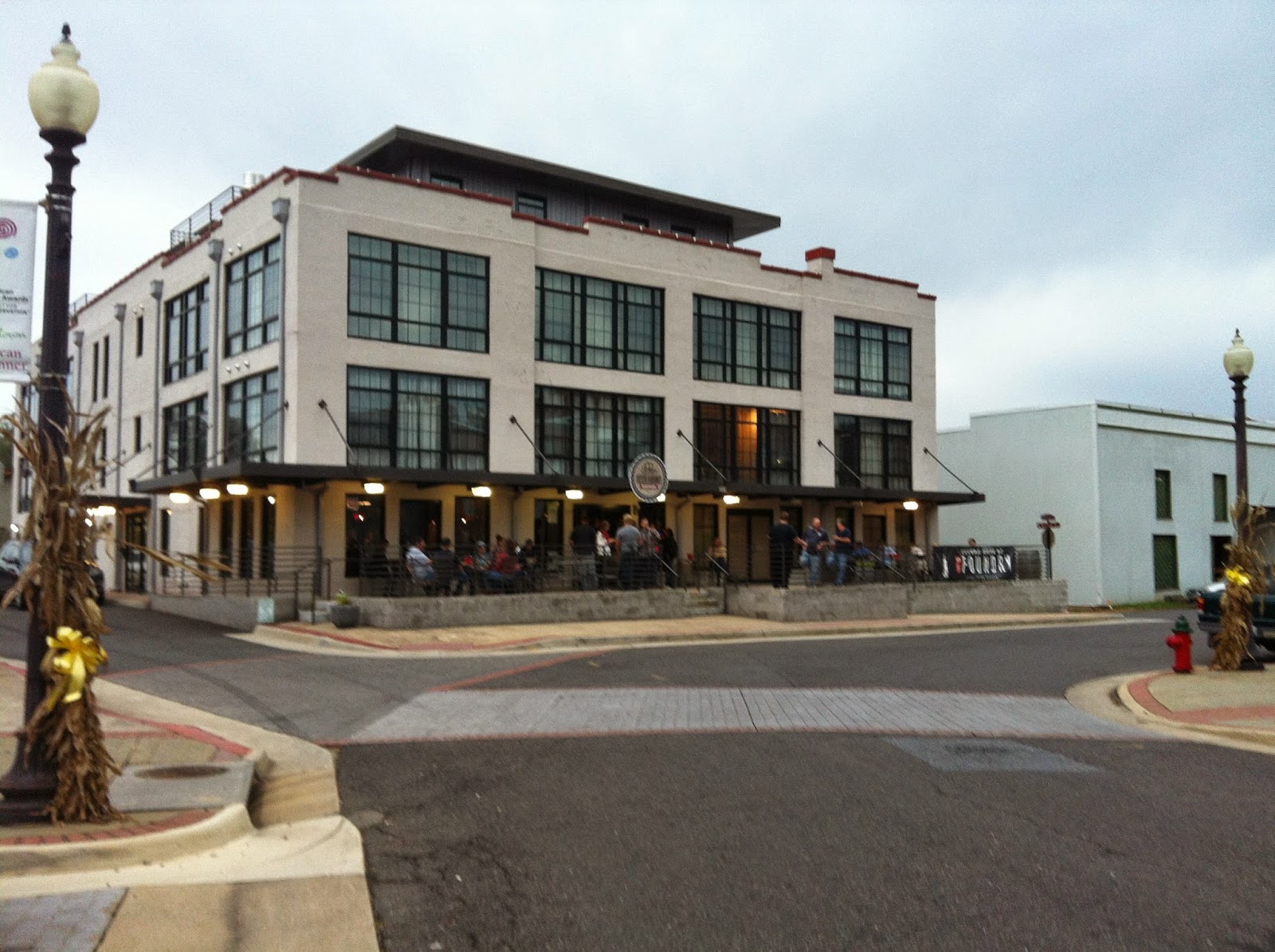 Entering the spacious pub area, we were greeted by loud, live music. I'm a fan of old rock and country music, but the volume made it quite difficult to place an order, and even the bar staff was struggling to converse with clients. There was a bit of a crowd so we had time to peruse the large chalk board menu. Beer Hound was pouring nine beers, plus a house root beer. We opted to order a flight of nine samplers. We headed to a distant corner and took a seat at one of the tall narrow tables provided. Even at the furthest indoor seats from the band, who we could not see as they were located around the corner, we found discussing the beers near impossible. We were however, very pleased to see the big buckets of roasted peanuts provided and hope that's on ongoing feature in the tasting room. 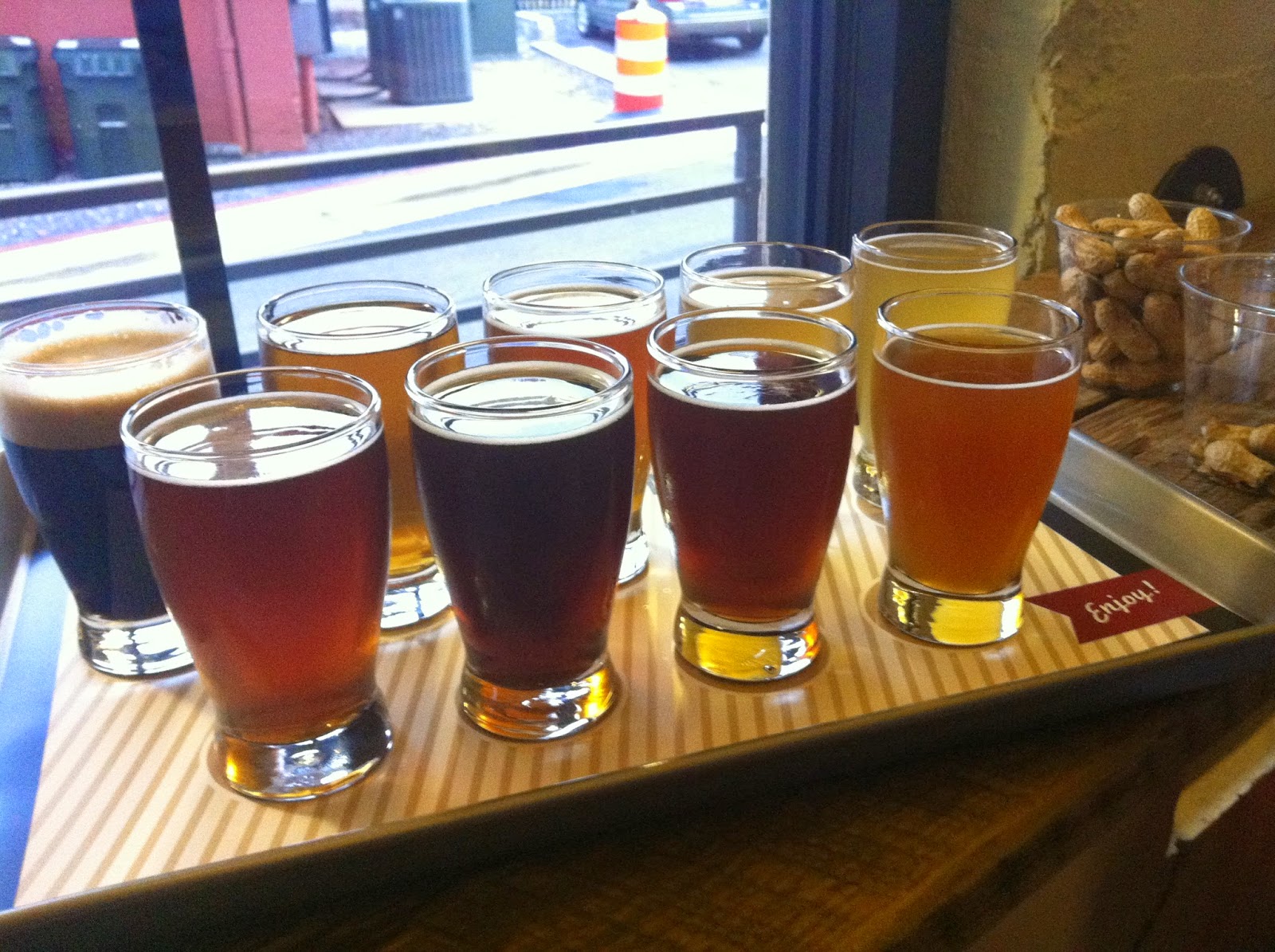 The first beer of the flight, Scottie 70 Shilling Scottish Ale checks in at just 4.1% ABV. The slightly sweet ale has hints of brown sugar, toffee and molasses. It was one of my favorites in the bunch. Interestingly, the next beer, Kujo Pale Ale was the second highest ABV beer, at 8.6%. It had a nice bitter citrus flavor. Moving on to Mutt American IPA, I was intrigued by the tropical citrus aroma. However, that didn't translate to the flavor, which we thought rather muted. This was the only beer we found somewhat disappointing, but I'll probably give it another try in the future before writing it off. Archie Brown Ale was an enjoyable, nutty brown ale with a hint of licorice. This one was another highlight in the flight. Switching gears, the next sample in the flight was the Teddy Cream Ale. Another interesting beer, with hints of white grape, honey and vanilla, Teddy was refreshing and flavorful.

With a quick refill of our peanut stash we continued the tasting exploration with Teufelhunde Abbey Blonde. The "big" beer of the bunch at 9.1%, this was still a light, thin bodied blonde ale with bread and fruit notes. Duke Amber Ale was another favorite of mine. A bready, toasted malt base was balanced with a bit of spice, giving a flavor profile we enjoyed but couldn't quite describe. The Apollo Hefeweizen is a classic German Hefeweizen. The flavors of clove, banana, wheat and yeast combine to make a mild but flavorful beer. I think this was Colleen's favorite of the group, "Mind if I finish this?" she asked. We finished with the Fang Oatmeal Stout which was served on nitro. We probably should have tasted this one earlier, as the nitro gas creaminess had mostly dissipated by now. With a moderately thin body, the Oatmeal Stout was slightly bitter, with roasted coffee, oats, bitter chocolate and a mildly bitter hop finish. At just 5.1%, Fang is another tasty, low ABV drink.

Most of the Beer Hound beers are both fairly low in ABV and mildly flavored. Their light to moderate body make them great candidates for an afternoon, or evening of sipping. We enjoyed most of the beers, but in the end opted to stop with just the samplers and forgo any full pints at this time, saving time to enjoy dinner before heading home. I saw brewer Kenny Thacker in the crowd, but given the loud music decided that any conversation would be nearly impossible, so will hope to meet him on a future visit — when there's not a grand opening celebration going on.

Interestingly, just one block over from Beer Hound is the future home of another brewery, Fär Göhn Brewing. It looks like we'll be making regular visits to Culpeper in the future.